Ciarán
Limerick, Ireland
I have produced documentaries, written articles, presented programmes, trained volunteers, done newsreading, and made tea with a number of publications and radio stations in the mid-west of Ireland. This blog survived without a purpose for a long time, but is now primarily centred on various happenings around Limerick, primarily music/arts based. Nothing too fancy, and don't expect razor-sharp analysis...For the most part, it'll be info. It will occasionally deviate from that.

Work etc coupled with the fact I no longer live in Limerick has made this page redundant.
If you are interested, I'll be keeping the playlists from my 2XM radio show up here.

A band I was once quite fond of, but didn't care all that much for their last record, even if it featured a certain J Marr, are coming to Limerick on December 5th at Dolan's Warehouse as part of an "intimate" Irish tour.

I heard they were doing some small Irish dates the other date but only realised that Limerick was one such place this afternoon.

Ticket details etc to be announced, with Frightened Rabbit as support.

Crazeeee frontman Isaac Brock tears through one of the "hits" here:

From Cali To Here

Tonight (Wednesday June 10th) in Mickey Martin's, Cheebah present Tradition In Transition(A Postcard From Cali), a screening of the new film from Limerick native B+ (or Brian Cross on his birth-cert)

Cross rose to fame in the nineties for designing album covers for the likes of Blackalicious, Mos Def, J5, David Axelrod, and many more, as well as tonnes of music videos. While many of his covers had graced discs or records in my own house, it wasn't until DJ Shadow's Irish dates in 2002 that I realised this guy was actually from Limerick.

At the time, Shadow was opening his gigs with the film "Keepintime", pitching old school drummers alongside some of the top hip-hop djs of the last two decades. Cross followed that up with "Brasil In Time"

Here is more info from Cheebah:

Limerick homeboy B+ has been busy down in Cali Columbia (Will 'Quantic' Holland's new home town) documenting the city and the result is Tradition in Transition.

Based around the music of Quantic and his Combo Barbaro from their forthcoming Tradition in Transition album on Tru Thoughts Records featuring the talents of Will Quantic, Alfredito Linares, Nidia Gongora, Freddy Colorado, Arthur Verocai, Joao Comanche Gomes and Malcolm Catto this is a screening not to be missed. Dj set from B+ afterwards with some crazy cumbia funk and off centre tropical beats.

Here's the trailer from Brasilintime to give you an indication of B+'s prowess as a director of music documentaries.

Posted by Ciarán at 9:33 AM No comments: Links to this post

Noise Fest In A Gaff In Castletroy? 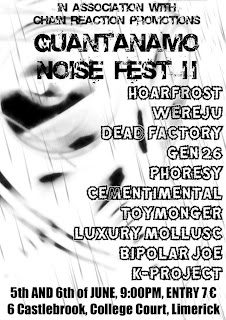 Possibly taking their cue from the likes of the Hideaway House in Dublin, a group by the name of Chain Reactions Promotions are hosting Guantanamo Noise-Fest II in Limerick next weekend, June 5th and 6th.

The shows take place in College Court (as you can see from poster above), an area of the suburbs that probably becomes quite deserted in the summer months when students move out en masse, so it may actually breathe some life into the estate. That is if the authorities don't stick their mitts in (On this point, if anybody running this gig would rather me remove this post for fear of where it will be read, please comment below and I'll delete).

One of the interesting discussions that came from the discussion I had with various promoters for [crude] mag back in March was about trying to find fresh perspectives on putting on gigs, and in particular looking at utilising non-traditional (i.e. pub, club, venue) locations for putting shows on.

Full line-up is on the poster, although I'm not clear if the €7 is a weekend price, or per night.

In the meantime, here's Toymonger in action:


Posted by Ciarán at 5:17 PM No comments: Links to this post

It's been a while I suppose... 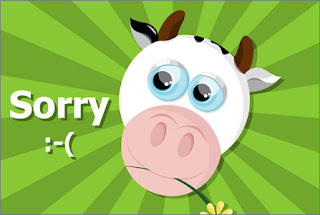 Most of you probably forgot this page existed; others probably delighted in the absense, expecting it to be the demise of this page. In all reality however, I am fooling myself. Nobody probably noticed. I've been marooned in the wilds of Clare with an ever-growing work schedule, so commitment to this blog has dropped somewhat. I've also thoroughly enjoyed myself at ATP Vs The Fans (Irish former boutique fests could learn a thing or two about picking a line-up).

Anyway, I will endeavour to make at least a weekly entry from now on. However, I would recommend folks click on the Cheebah and On The Beat blogs for more insightful and regular Limerick-related shenanigans.

So, what's happening ; actually, not a heck of a lot at the moment from what I can see. Is Limerick set to encounter its annual summer cultural slowdown. I suppose college exams are finishing up, which usually signals a complete lack of activity around the city. Could this be the year when that changes? Not likely unfortunately.

A few recent things:
Comment below on other bits n'pieces that have popped up for you recently, or are on the horizon.

Proper updates in next week or so. I promise.
Posted by Ciarán at 12:22 PM 3 comments: Links to this post

Why Would Anyone Put On A Gig?

This is exactly the question put to eight Limerick and Cork folks by myself as part of a discussion recently held in Dolan's (Limerick). The eight folks, all involved in running various shows in their respective cities, will share their knowledge and experiences with the good burgers that are going to read Issue 3 of [crude] magazine which hits shelves in the coming week.

Indeed, so flowing was the debate that this is just part 1 of a two-parter, with the gripping conclusion unleashed in the June issue of crude.

For those who can't wait to pick up [crude] in stores, the spanking new issue is launched Saturday night at Baker Place, Limerick, with The Hot Sprockets, Dryad's Saddle, and Last Days of Death Country all strutting their stuff, and rather bizarrely, there'll also be live tattooing taking place. Surely a health and safety risk if ever. Remember kids, don't get a tat if you've drank a litre of whiskey....there'll be a load of blood. 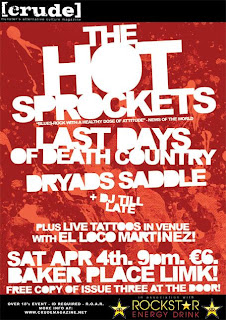 Posted by Ciarán at 1:04 PM 3 comments: Links to this post